Towards the revolution of artificial blood

In Switzerland, blood donations adequately cover the country’s needs, but worldwide, there is a shortage of blood supplies. The development of human blood substitutes bring new possibilities.

Switzerland currently needs a supply of 700 blood bags to meet its needs. “Levels can get low on a regular basis, especially at the beginning of the year and during the summer. But supplies, mostly thanks to the remarkable solidarity of donors, get us through,” says Michel Prudent, head of Transfusion Suisse, the umbrella organisation that oversees the country’s 11 regional blood transfusion centres. About 2.5% of people living in Switzerland go to a blood transfusion centre regularly, i.e. 160,164 individuals in 2020. Their 270,000 annual donations are then integrated into a tried-and-true system.

The collection system has been optimised over the past decade to improve planning efficiency, even in the event of a pandemic. “Fortunately we can rely on the loyalty of people who donate their blood. They react fast when we launch an emergency call for donations,” says Bernhard Wegmüller, who has been head of Transfusion CRS for almost four years. In terms of numbers, 266,161 blood donations were registered in 2020 (compared to 271,624 in 2019), despite the emergence of an unprecedented pandemic. This low decline “is due to the fact that people could continue donating blood as long as they complied with health protocols. Since the virus is not transmitted by blood, there is no risk of contamination.”

The age-old dream of artificial blood

Although Switzerland manages to maintain adequate blood supplies, the situation is far more worrying at the global level. The World Health Organization (WHO) consistently warns of chronic shortages, worsened by a form of health injustice. Of the 118 million units of blood collected every year, 40% comes from high-income countries, where only 16% of the world population lives. That means that many people do not have timely access to properly stored, and therefore adequately safe, blood bags. The WHO regularly campaigns to improve the structure of organisations involved in the transfusion process. The answer could come from laboratories, which have long searched for a substitute product to replace all or part of human blood.

Theoretically, all arguments are in favour of the prospect. Blood substitutes produced from the universal blood donor group, O negative, could treat anyone without fear of immunological reactions. They could be sterilised to destroy bacteria and viruses, therefore eliminating any risk of spreading infectious diseases. Finally, the shelf life could go beyond the storage time that applies specifically to human blood, i.e. one week for platelets and 49 days for red blood cells.

But going from theory to practice isn’t easy, says Michel Prudent. The blood is a complex and incredibly diverse vital fluid. Despite the discovery of blood groups in the early 20th century, then Rh factors, 250 “rare blood types” are on the register that do not fit into standard categories. Dozens of antigens determine an individual’s blood type. People with rare blood types are therefore in high demand for donation.

Blood is also complex because of the various functions performed by each constituent. “Red blood cells are used in surgery and traumatology to oxygenate the organs, but they also fight hereditary diseases such as sickle cell anaemia, a genetic disorder that deforms the red blood cells. Proteins such as albumin and immunoglobulins in the plasma play a role in maintaining proper blood pressure and boosting immune protection. Finally, platelets improve coagulation.” Developing substitutes with all those properties is therefore an extremely complex challenge.

Until now, the US, Canadian and Japanese teams that have attempted to develop a blood alternative product were using porcine or bovine haemoglobin. The projects were abandoned due to reactions observed in humans, such as constricted blood vessels, but that could change with the work of the French company Hemarina. This small company based in northwest France has taken an interest a very different animal, the lugworm, or Arenicola marina, a marine worm from the Atlantic coast. The company has developed artificial blood that copies the animal’s haemoglobin, which transports oxygen under conditions comparable to those of human red blood cells without undesirable effects. Initially designed to preserve grafts before a kidney or liver transplant, the product could be used to treat chronic wounds, especially in diabetics, or relieve patients suffering from sickle cell anaemia, an abnormality affecting red blood cells. “Hemarina has achieved great things in terms of organ oxygenation, but it is more of an adjunct treatment than a true substitute for human blood donation,” Michel Prudent says.

A major step forward has been taken in Japan. Scientists from Tokorozawa Medical College have developed universal artificial blood. Published in 2019 in the medical journal Transfusion, their research formed the basis for developing a solution to store platelets and red blood cells in “sacs” called liposomes. Produced without antibodies or antigens, the blood can be stored for more than a year and has already been tested on a dozen rabbits. No side effects were detected. “It’s still a laboratory product, but we’re getting closer to developing something that can replace a human donation,” says Michel Prudent. But many huge steps remain ahead. In vivo tests, clinical studies, approvals and market authorisations, and then production on an industrial scale. He believes it will take another 10 years before we can actually use this type of product.

That deadline sounds even too optimistic for Professor Bernhard Wegmüller. “History has shown that high-potential products in the laboratory don’t always make it through clinical trials. We might have more treatment options in the medium term for targeted use, but we will still need donors for the next 20 years, especially for very specific blood types, such as rare blood types.” Furthermore, developing an artificial substitute brings its own set of significant ethical and economic issues. Blood donation is currently a selfless, unpaid act*. However, bringing a synthetic blood substitute to market would be a commercial endeavour, with all the dynamics that entails. /

The four main blood groups – A, B, AB and O (ABO system) guarantee 90% compatibility of transfusions. They are determined by the presence, absence or combination of the hereditary A and B antigens on red blood cells.

A person with A antigens belongs to group A. From birth, that person will produce antibodies that can attack B antigens, while someone with blood type B will make anti-A antibodies. People with group O blood have neither A nor B antigens and develop both anti-A and anti-B antibodies. Group AB has no antigens. This distinction is vital, because if a patient is given blood from a group that is incompatible with their own, the antibodies clump together or destroy the injected red blood cells. This has serious consequences and can even be fatal for the recipient.

The presence or absence of another antigen adds another factor to this ABO system. The D antigen determines whether a person is Rh positive (Rh+) or negative (Rh-). People who have an Rh+ factor have the D antigen, while Rh- people do not. It is not recommended to give blood from an Rh+ donor to an Rh- recipient in a transfusion to prevent anti-D antibodies from developing.

Individuals from group O with an Rh- factor are therefore considered universal donors, since their blood can be accepted by all blood types in the ABO system.

However, these people are in the worst position if they need a transfusion, because they can only receive O- blood. Conversely, people in the AB+ group can receive all blood types, but can only give to recipients from their own group. People with AB+ blood are known as universal recipients. 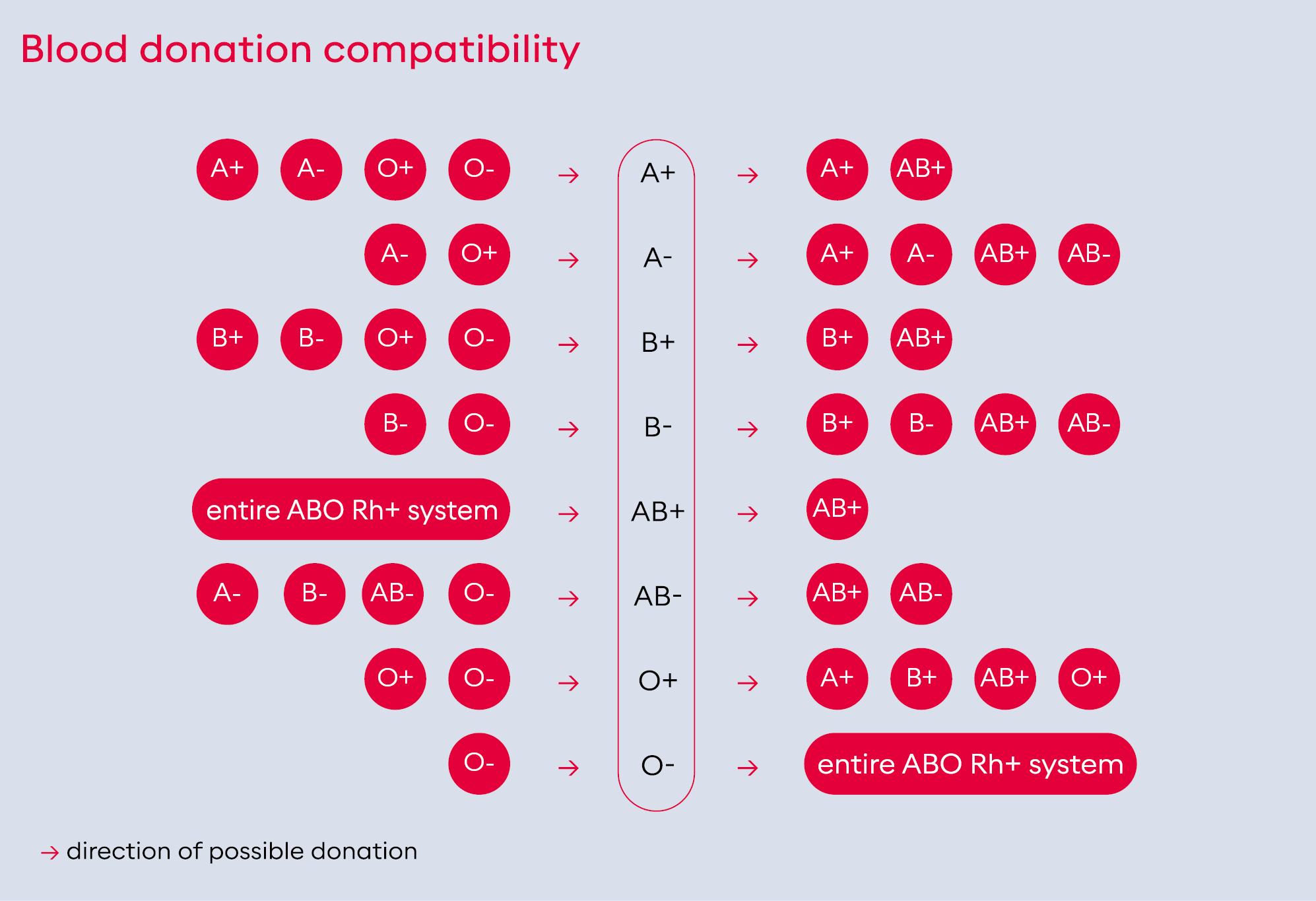 These marine worms, also called lugworms (Arenicola marina), can carry oxygen through their haemoglobin. This discovery could improve human organ preservation through the sometimes long transportation time between removal from the donor and transplant.

Distribution of blood groups in Switzerland (as a percentage of the population):

Distribution of the Rh factor:

85% of the Swiss population is Rh+